Vistara – Tata S.I.A Private Limited is owned by Indian domestic airlines with its head office in Gurgaon, Haryana and main base center at Indira Gandhi International Airport, Delhi. The airline, a joint venture between Tata Sons and Singapore Airlines, started its service on 7 January 2015 with its first flight between Delhi and Mumbai. By the end of June 2014, nearly two million people had flown by it and by April 2014, its share in the Indian domestic aircraft market had increased to 2.3 percent. Currently, these airlines fly to about 14 destinations with their Airbus A-320 aircraft. Vistara is also the first airline in India to offer premium economy seats for domestic flight services. 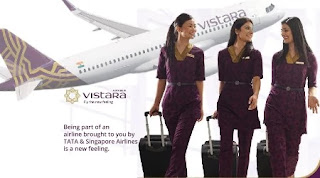 Vistara Airlines invites applicants for the post of Inflight Attendant (Cabin Crew), both male and female Indian aspirants who have been waiting for long to be the part of the world’s reputed airlines’ sector they all can grab the golden opportunity. You can find the information about the recruitment criteria and job procedure mentioned below.
Qualification: 12th Pass

Who have completed 12th in any stream with a minimum of 60% Sixty Percentage of Marks can apply for this vacancy.

The first round of the interview will be held in Mumbai, Aspirants who belong to any state in India can go for this interview.

and the rest interview most probably will be held in Gurgaon.
Timing: 10 AM – 2 PM
Aspirants are advised to reach before it as early as you can.
Height:

For Girls Should be minimum of 155 cm

For Boys Should be minimum of 170 cm
Weight:

For Boys BMI 18 to 25
Communication: Hindi and English, with fluent and good written skills in both languages.
Age: 18 to 32
Should not be a visible tattoo/Marks on your body
The Indians who have a valid passport, Aadhar card, and Pan card can apply for these vacancies,  Aspirants should carry Resume/CV, Passport size photo, 12th mark site in the walking interview.
Interested and eligible candidates can go through the official link given below but the one who doesn’t want to go through the link can directly appear in the walking interview, this link is not specified you can directly go for this interview in the given date, time and place.
Alert:  Do not submit any money whether anyone asks for money by mobile call or message, E-mail before selection or after If anyone asks money after the interview . Be alert you must avoid such a fraudulently.